Recently there has been released a video of a Norwegian Skydiver (Anders Helstrup) who had a close encounter with a probable meteorite during his parachute jump.

Looking at this video I was interested if video analysis, that we also use commonly in high-school, could give indications about if this movie is legitimate or not. There are a lot of discussions going on on the internet that the rock could have been coming from the parachute.

Edit: If the rock comes from inside the parachute an acceleration would be expected because of the sudden air-friction kicking in. The chance of the rock being at constant velocity directly after release is very small assuming a fall from the parachute. Also a not so high velocity difference with the skydiver is expected then. But it is possible the rock got a kick from the parachute. This could allow the rock to reach terminal velocity quite quickly after release. When it would be a meteorite the rock should be at terminal velocity and so basically not accelerating.

I performed some analysis on the video to try to see if I could discern between these two cases. Edit: it shows after extensive comparisons it’s impossible to make a 100% statement which of the two cases is the most likely. This makes the question what is the most probable possibility. Looking at statistics it is more likely that a pebble got released from the parachute. I do not say it’s not a meteorite (I can’t say that!), but I do think a this moment it’s the least probable solution.

I used Tracker Video Analysis for this purpose. This software allows to do measurements about positions of an object in a movie and find out about velocities and accelerations.

During the movie we can see that skydiver is moving his head, so I had to stabilize the background using the clouds in the distance. These are used as a fixed reference for the coordinate system. Furthermore I rotated the axes, so that the x-axis is aligned with the horizon and the y-axis is vertical.

In the movie it is clear that the rock is closing in as the size changes significantly because of perspective. So I used a scaling in the different images based on the size of the rock. The rock is basically the same size in reality, so changes are because of it coming closer. The distance travelled in the image is linear with this size so the moved distance measured from the image are scaled with the size of the rock in the corresponding image.

This result in the following measurement for the x- and y-directions: 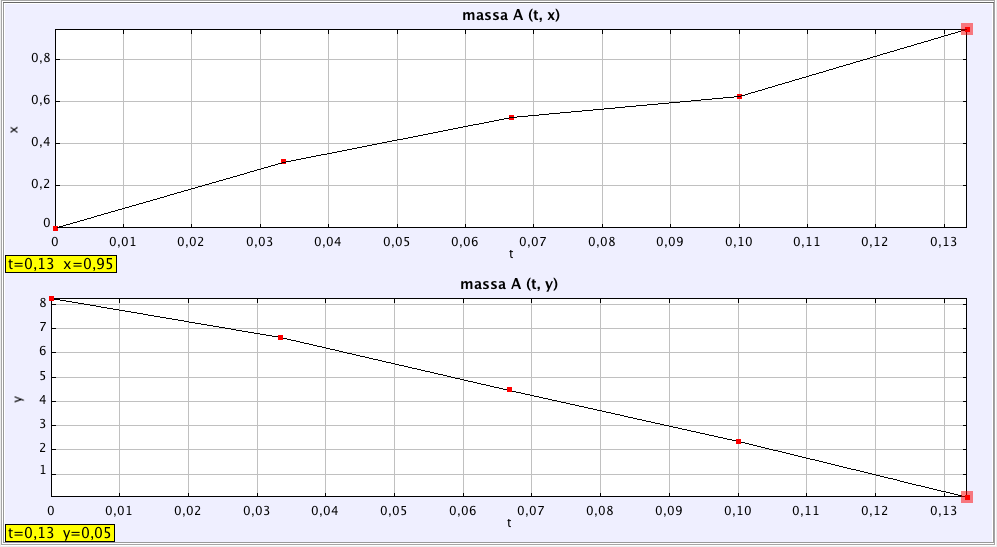 It’s clear that the change in position per unit of time is constant, which means the rock seems to have a constant velocity in x- as well as y-direction. To make an estimate of this velocity I assumed a size of the rock of about 16 cm (this is an estimate made by the Norwegian Meteor Society, so I just used this value to see what it would give.) Edit: This is of course an assumption, and this has the greatest impact on the estimated velocity. The acceleration being present or not is not dependent on this scale factor. This assumption was made assuming it’s a meteorite by the Norwegian Meteor Society. Further analysis shows this surely does not have to be the case. The measurements of velocities below here are using this assumption because I wanted to keep the original first analysis here. Further down there will be some remarks about this.

First the estimate in the x-direction: 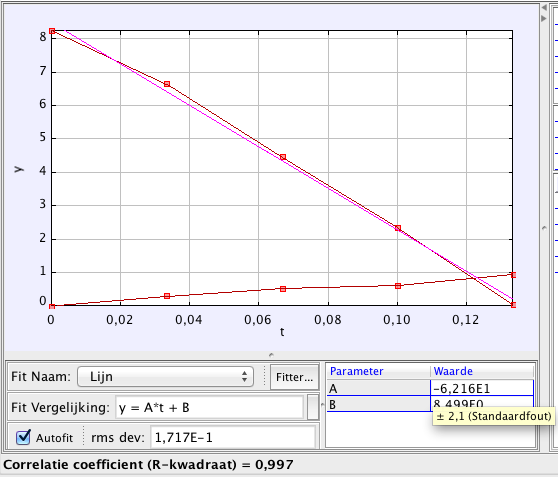 The estimated vertical velocity is -62,16 m/s with a standard deviation of 2,1 m/s. This is about 220 km/h with respect to the skydiver. The estimated speed of the skydiver was 100 km/h, so this would mean a velocity of the rock of about 320 km/h.

Edit: This was based on the initial assumption of a size of 16 cm. Using other smaller sizes in the analysis will give a much lower velocity. This image shows the position of the rock overlaid on the last image where it is visible. Here the velocity vectors are also shown, clearly indicating an almost vertical drop of the rock. In this image the coordinate system is put in parallel with the horizon and are the positions shown as they are in reality with respect to the last image. Motion of the head of the skydiver is compensated for in this view. Clearly the nearly vertical drop can be seen here.

With this small measurement series I hope I have shown that it’s not clear if the rock has from the parachute or not. Edit:  A drop from a fellow skydiver still in free fall could also explain the speed if we assume a large piece of 16 cm, but this would mean he should be in free fall just above a skydiver who has opened his parachute. This is a very dangerous maneuver that I think no skydiver would ever undertake…

So the other options that remain are that the movie has been generated by computer, but I’m sure that professional video editors can find this in the imagery if this is the case, or the movie is genuine and we have here maybe (but unlikely) first movie of a meteorite in actual free fall or a movie of a pebble falling from the chute. (My personal opinion (which has changed based on the available information!) is that the last is the case…)

I did make an extended model using the airdrag and forces on a rock coming from the parachute. I assumed in this model that the rock was released at the moment of opening the parachute with the same velocity as the skydiver was going at that moment. I know this model also has quite some assumptions and this will not give a definite answer for sure. I’m just trying to look at different models to see what is possible. Also this is some sort of exercise to see if anything can be done with this with my high-school students as a modelling exercise.

When using this model I get the following output when I input a pebble of about 2,0 cm from the parachute:

This graph shows the differential velocity between the skydiver and the pebble released from a parachute about 5,0 above the skydiver. The green line shows the velocity that comes out from the video analysis when using this size. It shows that the velocity estimated from the model would be about 2,5x higher than we see in the video after about 3 seconds (when the parachute is fully opened).

This graph shows the height of the pebble with respect to the skydiver. After only 1 second it would already be below the skydiver. That could be possible, but than, when looking at the video the pebble should be released a bit later when the chute was already opened. 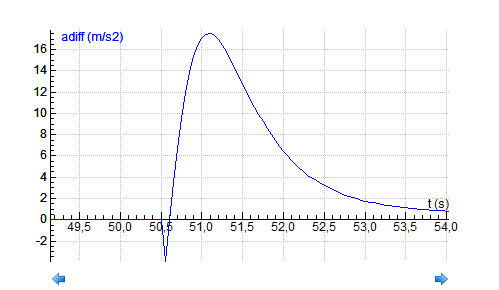 This image shows the acceleration with respect to the skydiver. This is where I have the biggest problem with. The video shows an object moving at more or less a constant velocity with no acceleration during the recording. According to this model we would have quite a high acceleration accept for a very short period after the opening of the chute, but it changes so fast this should be detectable. Edit: a kick from the parachute would generate more possibilities, including a constant velocity.

I would love to investigate this further, but time is the problem here. I think we will not have a definite answer until something is found, or somebody does a really good, professional modelling. I liked to do this and thanks for the comments. I hope I gave some things to think about.

It showed that the pebble came from the parachute. A clear explanation is given here. Science did its work and the case has been solved 🙂