M57 The search for the outer halo part 2… 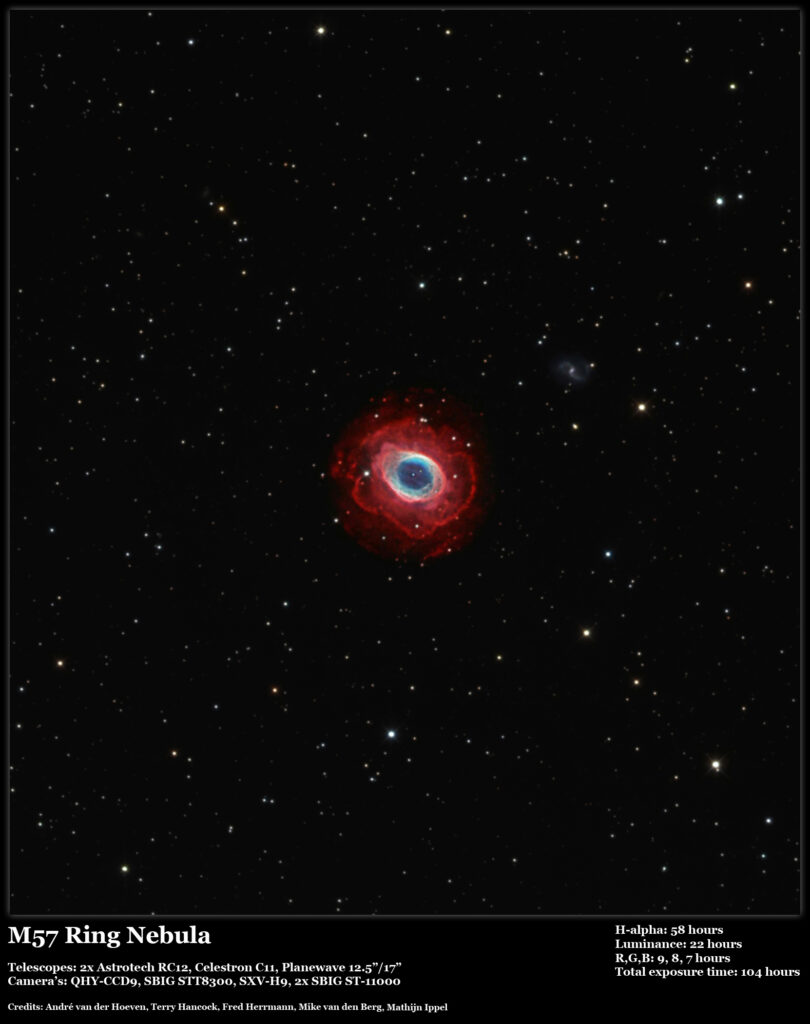 Like other old red giants M57, better known as the Ring nebula, has expelled most of its material in the form of hydrogen and oxygen.  At its core lies the white dwarf remnant which consists mainly of carbon.  The lighter hydrogen forms the outer reddish envelope while the heavier blue-green oxygen remains about the core.  The gases in the expanding shell are illuminated by the radiation of the central white dwarf who’s glow is still 200 times brighter than our Sun.

When we look closely we see that M57 consists of three structures, the inner, bright and most familiar, nebula, which is about 86″ by 62″. This is surrounded by a second fainter halo ranging until about 156″ x 136″ from the central star. Surrounding these two there is a very faint third halo of about 3,8′ diameter. The brightnesses of these three halos differ a lot, the second ring being about 5x (2 magnitudes) fainter than the central ring, and the outermost being almost 5000x fainter than the central ring (>9 magnitudes fainter…).

The huge difference in brightness makes it very difficult to observe the halos. Using data from a C11 and two 12″ RC telescopes about 40 hours of data was gathered using narrowband h-alpha filters (3 and 5 nm) to lift the halo out of the background noise during a period of over 2 years (2011-2013). The barred spiral galaxy IC 1296 is also visible in the upper part of the image.  IC 1296 distance is estimated to be 220 million light years.

From Earth’s perspective, the nebula looks roughly elliptical. However from research it turns out that the nebula is shaped like a distorted doughnut. We are gazing almost directly down one of the poles of this structure, with a brightly coloured barrel of material stretching away from us. Although the centre of this doughnut may look empty, it is actually full of lower density material that stretches both towards and away from us, creating a shape similar to a rugby ball slotted into the doughnut’s central gap.

The inner halo around M57 was only discovered in 1935 by J.C. Duncan using a 30 min image with the 2,5 m Hooker telescope. The discovery paper can be found here. A follow up paper with a first image can be seen here.

The outer most halo was only discovered in 1987 using a telescope in Mexico. The discovery paper can be found here.

A comparison of our image with the discovery images from 1937 and 1987 is shown here:

Here is a comparison with an image made by the Hubble and Subaru 8.2 m telescopes. It nicely shows the signals that we measured are real phenomenon in the shells: 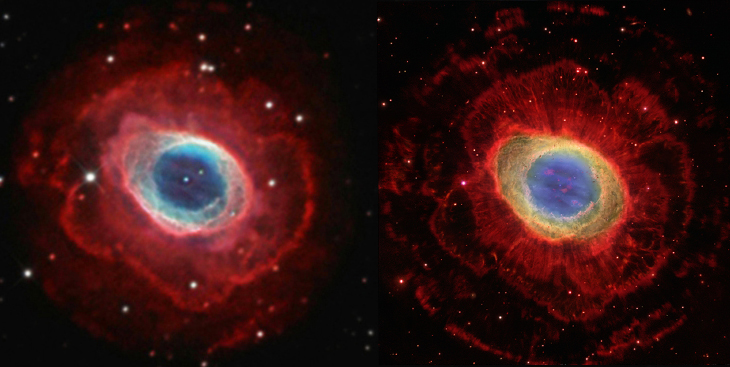