Herbig-Haro objects in the Pelican Nebula 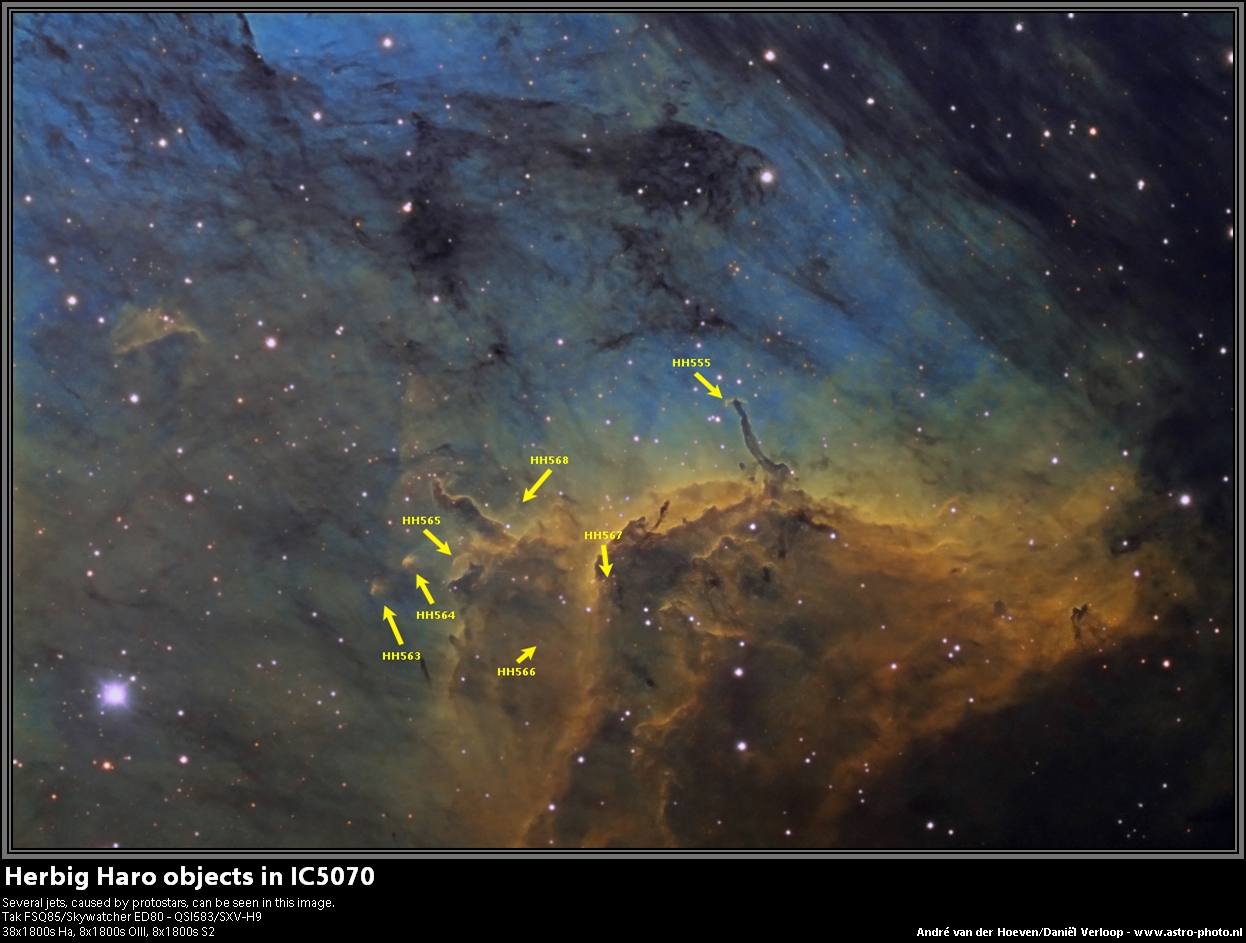 Jets are an active, short-lived phase of star formation, lasting only about 100 000 years. They are called Herbig-Haro (HH) objects, named after George Herbig and Guillermo Haro, who studied the outflows in the 1950’s. Astronomers still don’t know what role jets play in the star formation process or exactly how the star unleashes them.

Although Herbig–Haro (HH) objects come in a wide array of shapes, the basic configuration is usually the same. Twin jets of heated gas, ejected in opposite directions from a forming star, stream through interstellar space.

A star forms from a collapsing cloud of cold hydrogen gas. As the star grows, it attracts more matter by its gravitation, creating a large spinning disc of gas and dust around it. Eventually, planets may arise within the disc as dust clumps together.

The disc material gradually spirals onto the star and escapes as high velocity jets along the star’s axis of spin. The speedy jets may initially be confined to narrow beams by the star’s powerful magnetic field. The jet phase stops when the disc runs out of material, usually a few million years after the star’s birth.

The intricate structures within HH 555 and  other Herbig–Haro objects exist because the jets are not being blown through a pure vacuum. When the energetic and fast-moving Herbig–Haro jets slam into colder gas, they form shock fronts
that look and behave much like the bow waves that form in front of a boat. These so-called bow shocks, which glow thanks to very high temperatures, are a distinctive feature of Herbig-Haro objects.

The structure of HH 555 and other objects like it acts like a ticker-tape, recording the activity of the star that is the origin of the jet. Erratic outbursts from the star happen at times when more matter is falling in, and these are recorded as brighter knots or blobs within the Herbig-Haro object, which move along the jet over the years. Although the jets are very fast-moving, they are also very large: the streamer of gas in this image
is around half a light-year in length. This means that the motion appears quite slow from our vantage point, even when measured over years.

By measuring the current speed and positions of blobs within a Herbig-Haro object, astronomers can rewind time, projecting the motion of the knots backwards to the moment when they were emitted. This in turn tells the scientists about the environment directly around the forming star.