From Tulip to Crescent…

This image is the result of a cooperation with 3 fellow astrophotographers, Sara Wager, Dominique Dierick and Kees Scherer and myself. It all started in 2017 when we worked together on a larger mosaic of part of the Cygnus constellation. The zoomable result of this cooperation can be seen here and I would recommend to strawl through the image to find all the details. Further down the page there is more information about the image, how it was made and what can be seen in the image if you look closely. Have fun!

Last year (2021) I wanted to make a nice image of the Tulip Nebula (SH2-101) and the nearby hydrogen clouds so I made an image stack consisting of 1 panel of this region. This summer (2022) they predicted a longer period of clear skies and I decided to extend the field of view to get more coverage of this very interesting region. To get this done in the 6 clear nights that were predicted I had to think about how to cover the region as efficient as possible to get all panels done in this time. This resulted in 3 vertical images in the middle and 2 horizontal panels on the top and the bottom to get it all fitted in 6 timeslots of one night each. The image shows how the panels were divided to get the Tulip Nebula mosaic done the given time.

After finishing this image I noticed that I was very nearby the Crescent nebula region and knew I had a lot of data of that region also, so I decided to look onto my image archive to see which data there was more region and that was how I stumbled onto the mosaic data again that we all captured in 2017. It showed that with this data a very nice field of view could be generated with full coverage from the Tulip up to far above the Crescent nebula. Because of the high quality of the data processing was very easy and that is what resulted in this image with the following coverage: 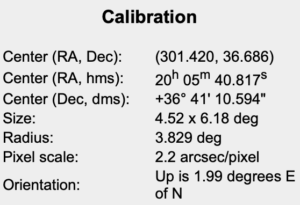 In the image some very nice details can be seen of astronomical features. First object of interest is the Crescent nebula: The Crescent Nebula is a nebula that surrounds the star WR-136, a so called Wolf-Rayet star. This relatively young star (about 4-5 million years old) is so large that it burned through its hydrogen fuel very quickly and started to burn helium. In this process shells of gas were ejected from the star with speeds of up to 3000 km/s. These shells collide with colder gas ejected in earlier phases of the stars life resulting in the excitation of the hydrogen and oxygen gas around the star which we see as the nebula. Because of their short lifespan Wolf-Rayet stars are pretty rare in our galaxy. About 150 are known.

In the lower left corner of the image another very illusive object can be seen. This object is known as the Soap Bubble Nebula or PN G75.5+1.7. This is a very faint planetary nebula which was only discovered on July 6th 2008 by Dave Jurasevich and confirmed on July 17th by Keith Quattrocchi and Mel Helm. Nowadays with good cameras the nebula can be pretty easily be detected as long as narrowband filters are used.

Another interesting object in the field of view is the Tulip Nebula: 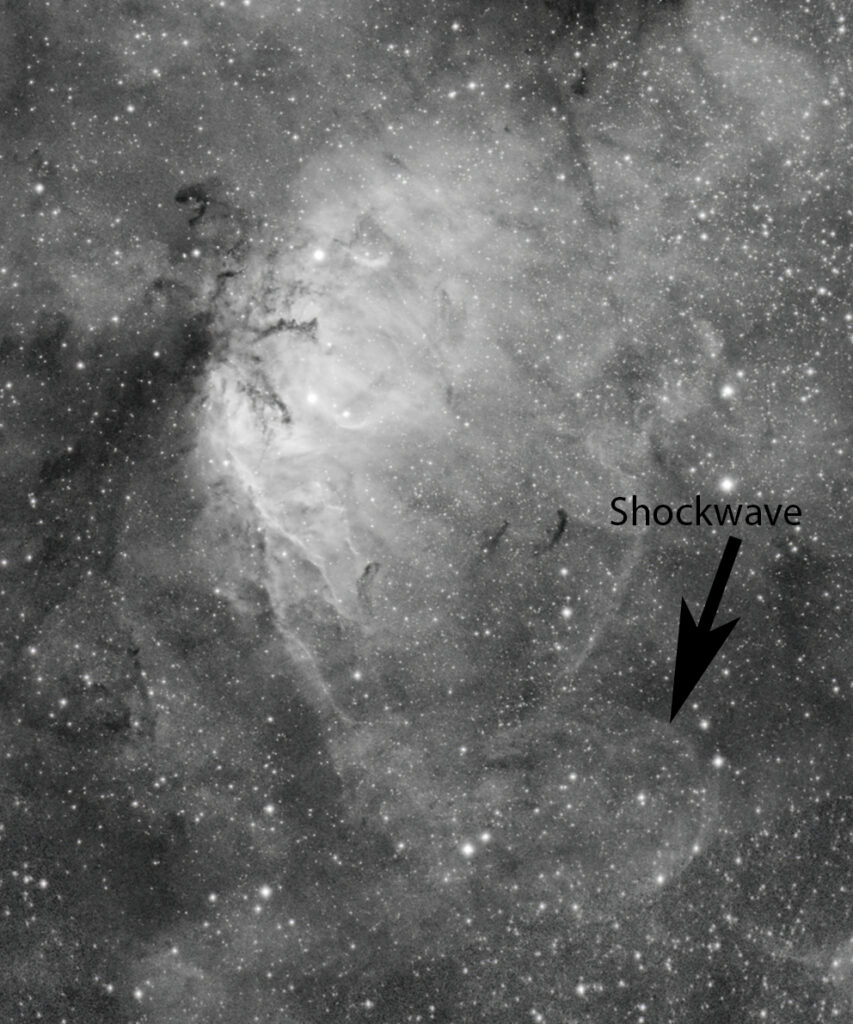 The Tulip Nebula (SH2-101) and the Cygnus-X1 shockwave

The Tulip Nebula, aka SH2-101, is an emission nebula that is lighted by young stars that ionise the gas of the nebula. The nebula is 6000 lightyears from Earth and has a diameter of about 70 lightyears.

Sh2-101, at least in the field seen from Earth, is in close proximity to microquasar Cygnus X-1, site of one of the first suspected black holes. Cygnus X-1 is the brighter one of the 2 bright stars just below the nebula. The companion star of Cygnus X-1 is a spectral class O9.7 Iab supergiant with a mass of 21 solar masses and 20 times the radius of the Sun. The period of the binary system is 5.8 days and the pair is separated by 0.2 astronomical units. The black hole has a mass of 15 solar masses and a Schwarzschild radius of 45 km. A bowshock is created by a jet of energetic particles from the black hole as they interact with the interstellar medium. It can be seen in the image by its arc-shaped structure pointed by the arrow. 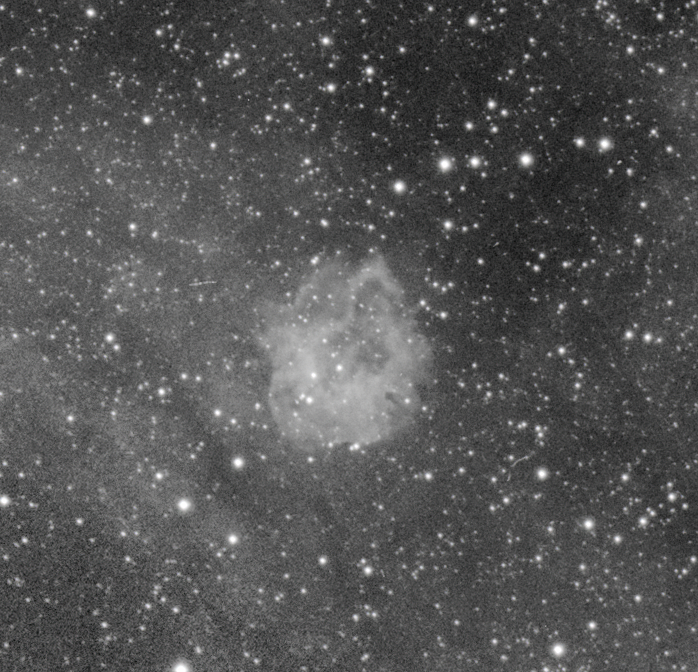 Seldom imaged by amateur astronomers, this is a very faint emission nebula in the constellation Cygnus. This is located due east of the popular Crescent Nebula. Sh-104 is viewed by professional astronomers as a good illustration of the “collect and collapse” model of star formation triggered by the rapid expansion of a Helium II region.

There is a lot more to explore in this region, so I would recommend to look around the image and see if you can find more interesting structures.