Last year (2013) I visited with my wife and children for the first time a holiday house in Daun, Germany. There I got in touch with some of the members of the Astronomische Vereinigung Vulkaneifel (AVV). This group has taken up the responsibility to keep the Hoher List observatory in Schalkenmehren (near Daun) partly working and to connect former employees, amateur astronomers and other people interested in astronomy.

The Hoher List Observatory (German: Observatorium Hoher List) is an astronomical observatory located about 60 km south of Bonn, Germany, near the town of Daun in the mountain range of Eifel. The observatory was operated until 2012 by the Argelander Institute for Astronomy of the University of Bonn. 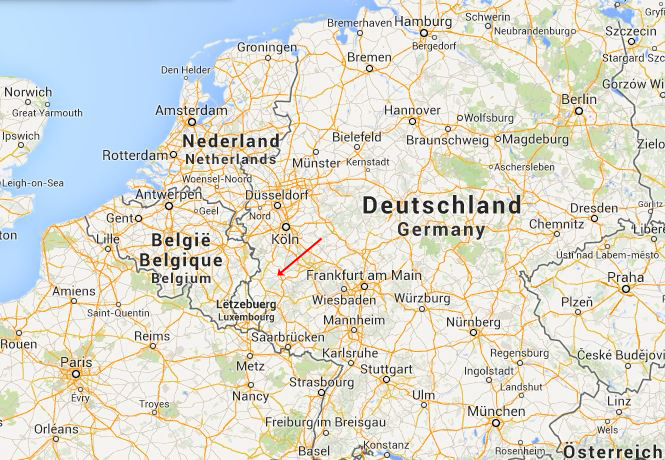 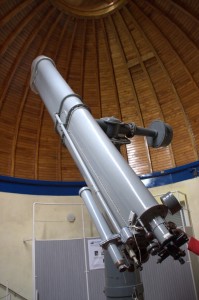 Until the 1940s, Bonn astronomical observations were carried out mainly from Argelander’s old observatory in Bonn itself. With more and more electrical lights in the city, the night sky in town became increasingly brighter, making observations difficult. In search for an alternative location, in 1950, the mountain Hoher List above the village of Schalkenmehren was found to be well suited for astronomical observation. The rural surrounds meant very low sky brightness. It was decided to relocate the Bonn telescopes. The new observatory was inaugurated in 1954, after the 50 cm Schmidt telescope had been installed in the first dome. A major extension in 1964 included the relocation of the Double Refractor, which dates from 1899.

The final dome to be erected contains a 1 m Cassegrain telescope, the largest and most modern of the observatory’s telescopes. Today, there are six telescopes at the observatory. The Double Refractor aside, there is also the 16 cm Schröder Refractor, which was used for the Cordoba Durchmusterung (the southern extension of the Bonner Durchmusterung).

The observatory was an outstation of the Argelander Institute for Astronomy of the University of Bonn. Many students have obtained their diploma or doctorate, and important scientific work in astrometry and photometry of stars of the Milky Way was carried out. Nowadays, the Hoher List Observatory no longer has the same scientific significance, as observations from the Eifel have become more difficult. The sky brightness is much increased, and the weather conditions are no match for observatories in Chile or the United States. The Hoher List Observatory delivered the practical parts of student education and provided a laboratory environment to develop astronomical instruments and parts, which was then be deployed on telescopes in, e.g., Spain or Chile.

From 2007 till 2012, the 1 m telescope was used for research for the HOLIGRAIL (Hoher List Gravitational Lensing) project.

From this time one of the buildings was rented by the university to the AVV. This is the building that contains the 1,0 m cassegrain telescope. 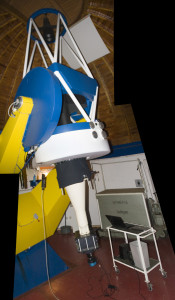 On April 27th I arrived at the holiday location and weather for that evening seemed to be quite good. We went directly to the observatory to do some tests to see what we could obtain with the large telescope. For imaging I had a borrowed full-frame SXV-H35 available and we directly connected this to the telescope to do some imaging. We decided to do some imagery of several galaxies to look at the resolution and quality of the imagery. Unfortunately somehow the images seemed to be very weak in signal and after several attempts we decided to step over to my own QSI583 to see how that would perform (see image to the left and notice how small it is compared to the telescope).

Somehow we got a strong signal with that camera and we decided to make 5 min imagery of M51 as a first test. After only 25 minutes clouds came in and we decided to call off for that evening, but we were happy to see we could get into focus and obtain imagery.

Only 5 x 5 minutes of data already showed quite some detail in this very nice galaxy and it promised that it could be even better as we didn’t perform the best focusing possible at that moment. After review and contact with the owner of the SXV-H35 it was clear that there was an error in our filter setting, because of which we had a red filter instead of a luminance filter in front of the camera during imaging.

After this weather detoriated and for the rest of the week weather was cloudy, but nice.

Originally I had to leave on Saturday back for home, but weather forecasts for Saturday to Sunday night were so good that we decided to stay a day longer.

I went in the early evening hours to the observatory to put up my setup next to the large telescope to perform some parallel imaging using the large telescope with the SXV-H35  and a TEC-140 with the QSI583. This gave some very nice images of the two telescopes besides each other. 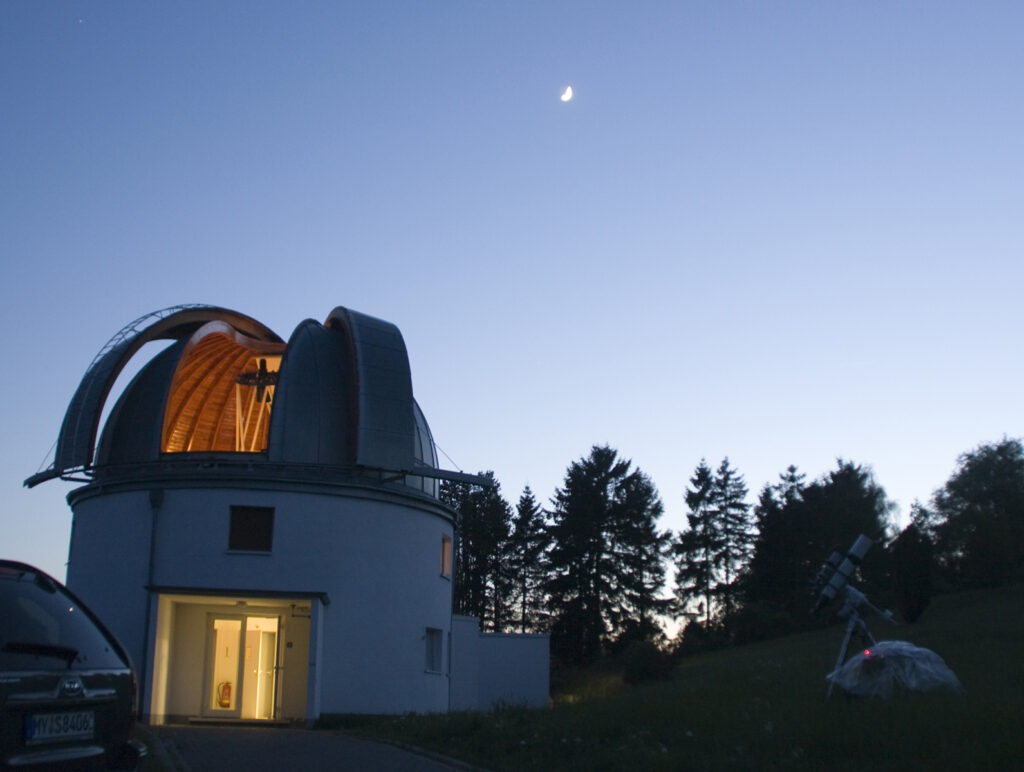 Sky conditions proved to be quite good and we decided to start with image NGC 3718. This is a very nice interacting galaxy in Ursa Major, aka ARP-214.

We decided to make 10 min exposures and started the system. It’s a very impressive sight to see the telescope swinging to it’s tracking position like a gracious ballerina, while we’re talking about several thousands kilos moving.

After a few images we noticed that the stars got a bit egg shaped and we were wondering what was happening. It took almost an hour to find out that the rotation of the corrector system behind the telescope (which is huge I can tell you…) was not fixed. The cable to the camera was slowly pulling the system and as such rotating this huge device.

After fixing this we started imaging again and were able to take about 2,5 hours (16 x 600s) of imagery using the telescope.

After processing the following image resulted from this (and don’t forget we are talking about only 2,5 hours of imagery here. This should of course be much more to get the most out of it): 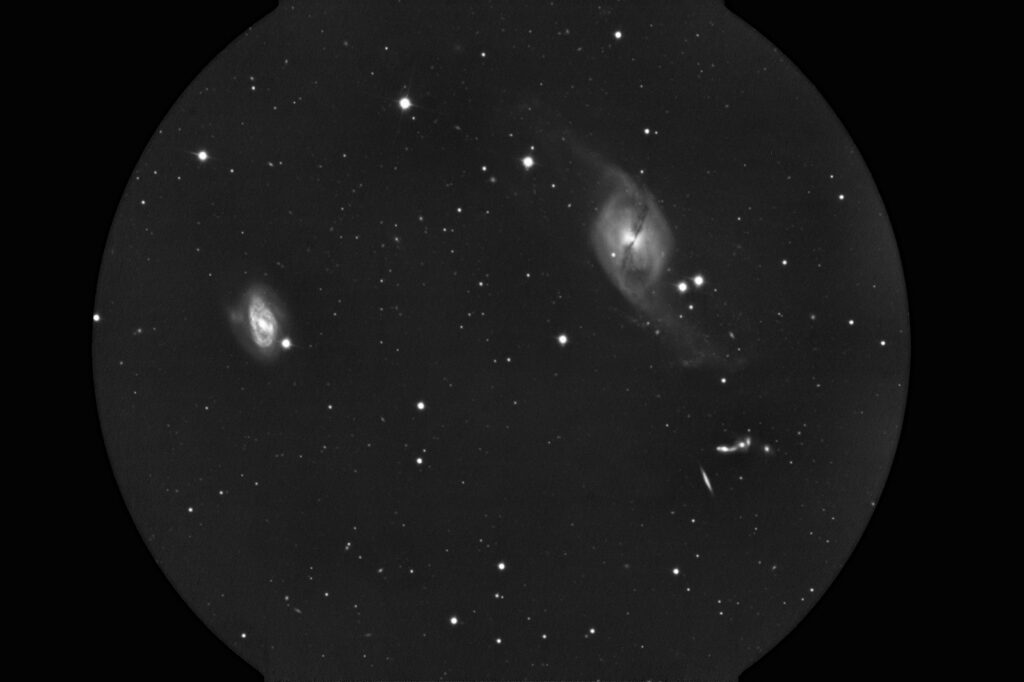 The image shows at the upper right NGC3718 with at the center left NGC 3729. Below NGC3718 Hickson 56, a galaxy group at 400 million lightyears distance, can be seen. Limiting magnitude for this image is about 23.

During imaging there was some time to take pictures of the telescope at work. 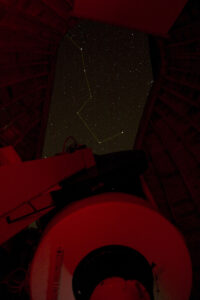 While performing the imaging at the large telescope I also performed some imaging with the TEC140 outside of the building. My goal was to see if I could catch the dust tail of NGC 3628 (Leo triplet).

I did succeed in catching it, but it was even much fainter than expected and the limited amount of data didn’t allow me to make very beautiful image of it. But the inverted image clearly shows the tail: At about 2.30 we decided to see if we could see the comet Pannstarrs 2012/K1 which was visible near the Whirlpool galaxy (M51). We decided to image this with the 1m as well as with the TEC.

The image taken with the 1m clearly shows the coma around the comet nucleus: 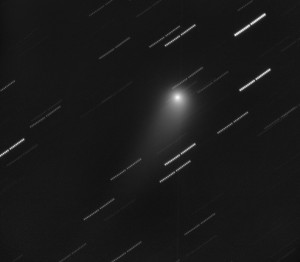 With the TEC a larger field of view was visible, and the tail was more pronounced: 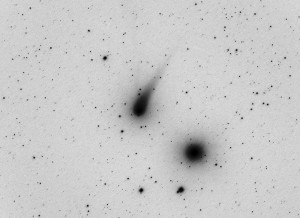 At around 3.30 I was called outside by my fellow astrophotographer and he pointed me at the milky way that was clearly visible from this location. I could see with my bare eyes the whole milky way including the dust lane dividing it near its centre. I took some images of this and then slowly the sun started to rise again. This concluded this great night of observation at the Hoher List observatory.

About one thing I’m sure. I’ll be back…

Thanks to Harald Simon from the AVV and Erwin Wünnenberg to make this possible!