NGC 7331 (in the lower left of the image) is a galaxy similar to our own galaxy in the constellation Pegasus at a distance of about 50 million lightyears. It was discovered in 1784 by William Herschel. Below NGC 7331 a few other galaxies can be seen that are part of the so called Deer Lick group. These galaxies have an absolute distance of 10x that of NGC 7331.

In the upper left another group of galaxies can be seen called Stephan’s  quintet. Stephan’s quintet is a galactic crash site. A number of galaxies is undergoing a collision that makes the galaxies deform because of the tidal forces between them.

The name, however, is a bit of a misnomer. Studies have shown that group member NGC 7320, at lower right of the group, is actually a
foreground galaxy that is about seven times closer to Earth than the rest of the group.

Three of the galaxies have distorted shapes, elongated spiral arms, and long, gaseous tidal tails containing myriad star clusters, proof of their close encounters. These interactions have sparked a frenzy of star birth in the central pair of galaxies. This drama is being played out against a rich backdrop of faraway galaxies.

In this region about 740 galaxies up to magnitude 20 can be seen. This image shows the galaxies with their magnitudes: 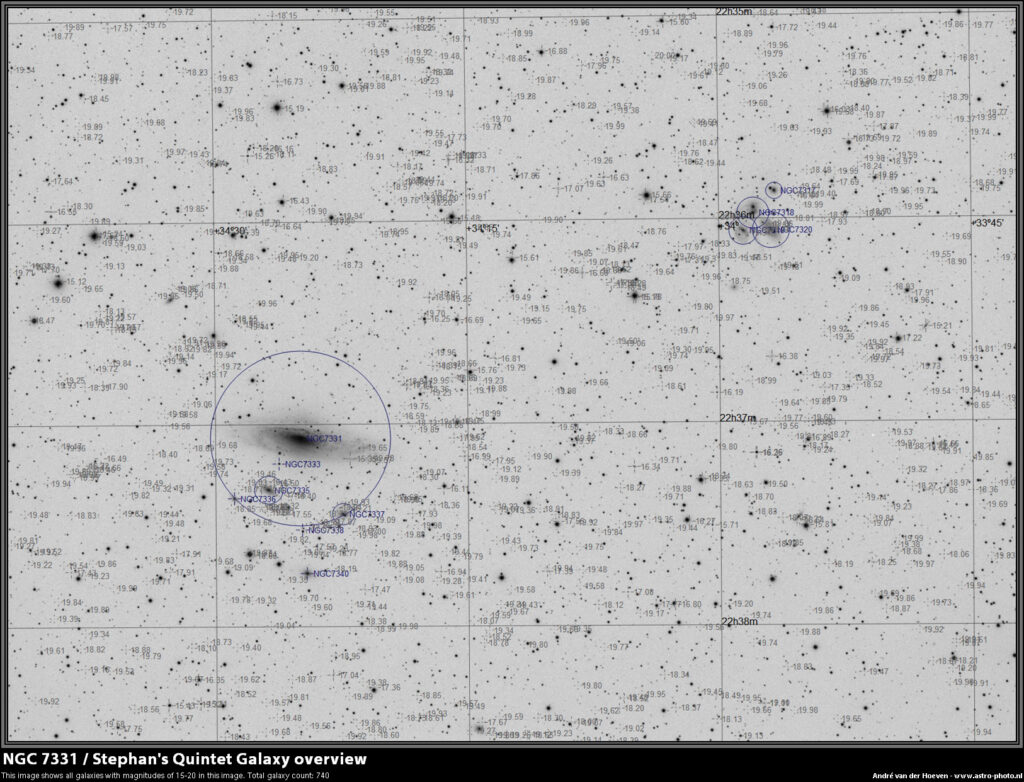 NGC 7319, at bottom left, is a barred spiral with distinct spiral arms that follow nearly 180 degrees back to the bar. Continuing clockwise, the next galaxy appears to have two cores, but it is actually two galaxies, NGC 7318A and NGC 7318B.
Encircling the galaxies are young, bright blue star clusters and pinkish clouds of glowing hydrogen where infant stars are
being born. These stars are less than 10 million years old and have not yet blown away their natal cloud. Far away from the
galaxies, at left, is a patch of intergalactic space where many star clusters are forming.

NGC 7317, at top right, is a normal-looking elliptical galaxy that is less affected by the interactions.