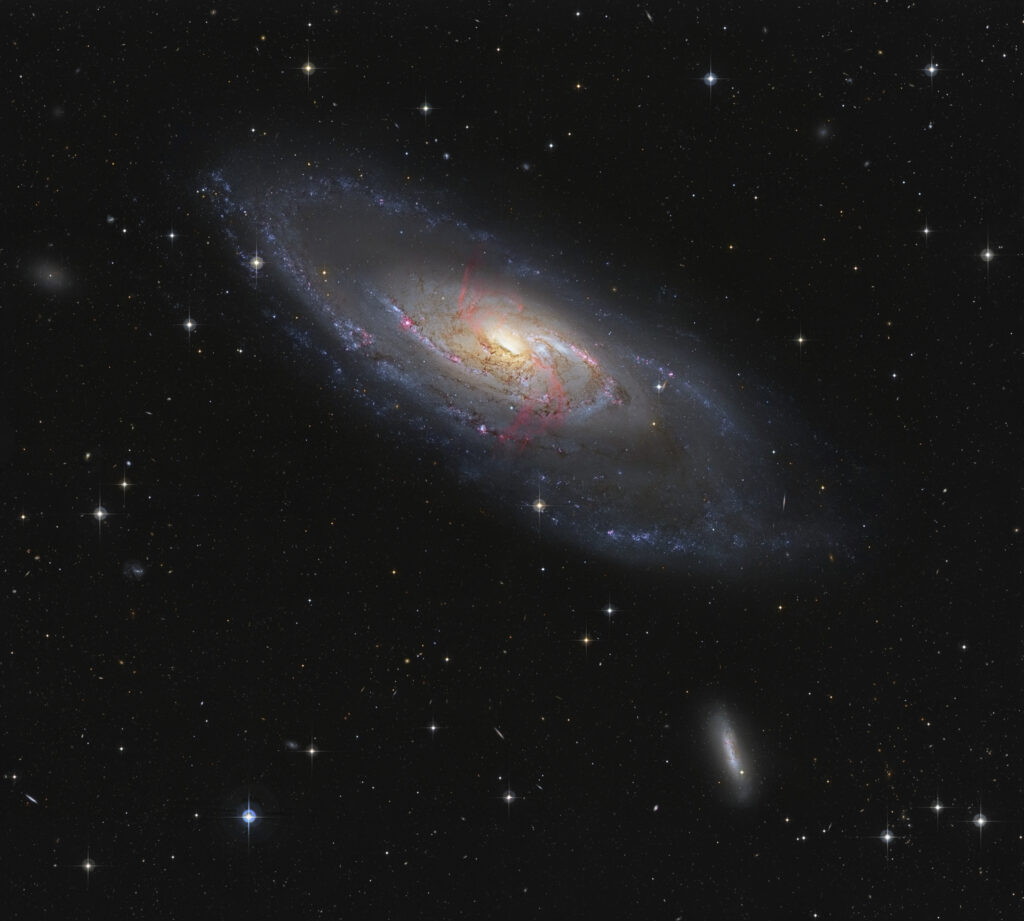 About 2 years ago I worked on a mosaic of Messier 106, made using images of the Hubble Space Telescope.

Recently I found some new data sources on the internet, including some huge telescope databases with data from professional telescopes. That’s when I decided to see it there would be more field of view possible for this image.

Processing of this image has cost me over 4 weeks, but I think the result is quite unique. As far as I could tell there has never been made such a high resolution image of M106 at this field of view.

The image shows galaxies up to a magnitude of +25. Literally thousands of galaxies can be observed in the background.

After the first version that I made I got in touch with Roberto Colombari, Robert Gendler and Jay Gabany.

Roberto and Robert made an image together of M106 with a comparable field of view using another dataset and with their permission I combined their color data with my previous image to get more color detail in the image.

Furthermore Jay Gabany had a great H-alpha image of the galaxy. I combined this image together with h-alpha data from the CFHT telescope to make the ‘hidden’ arms of M106 visible. These arms are clearly visible in radio- and x-ray imagery, but are almost invisible in the visible light, except in H-alpha.

Colors of the M106 core were imaged by the 1m telescope of the Tzec Maun Foundation in Cloudcroft, NM and the overal color was combined with the image of Roberto and Robert.

Several details made by the 8.2m Subaru telescope in Hawaii.

Pierre Méchain discovered this galaxy in July 1781. He wrote a letter in 1783 to Bernoulli mentioning the discovery. He also sent his discovery to Charles Messier, but he never added it to his famous Messier catalogue. It was only in 1948 that this object was added as M106 to the catalogue.

In 1788 this galaxy was independently discovered by the famous astronomer William Herschel, who described it as follows:
“Very brilliant. Bright Nucleus. With faint milky branches north preceding and south following. 15’ long and to the south following running into very faint nebulosity extending a great way. The nucleus is not round.”

M106 is at a distance of about 25 million light-years from our own galaxy in the
constellation Canes Venatici. It is a spiral type galaxy and has a diameter of about 135 000 light-years. The spiral arms extend clearly out of the bright core and active star formation areas can be recognized in the arms.

M106 has been classified as a Seyfert galaxy with an active nucleus, showing emissions in the X-ray spectrum. The core probably contains a massive black hole with a mass of over 40 million solar masses. This is about ten times the mass of the central black hole in our own Milky Way.

This data was obtained using the facilities of the Canadian Astronomy Data Centre operated by the National Research Council of Canada with the support of the Canadian Space Agency.

Thanks to the Tzec Maun Foundation for sharing their data and telescope time.

Thanks to the Subaru Telescope data archive.