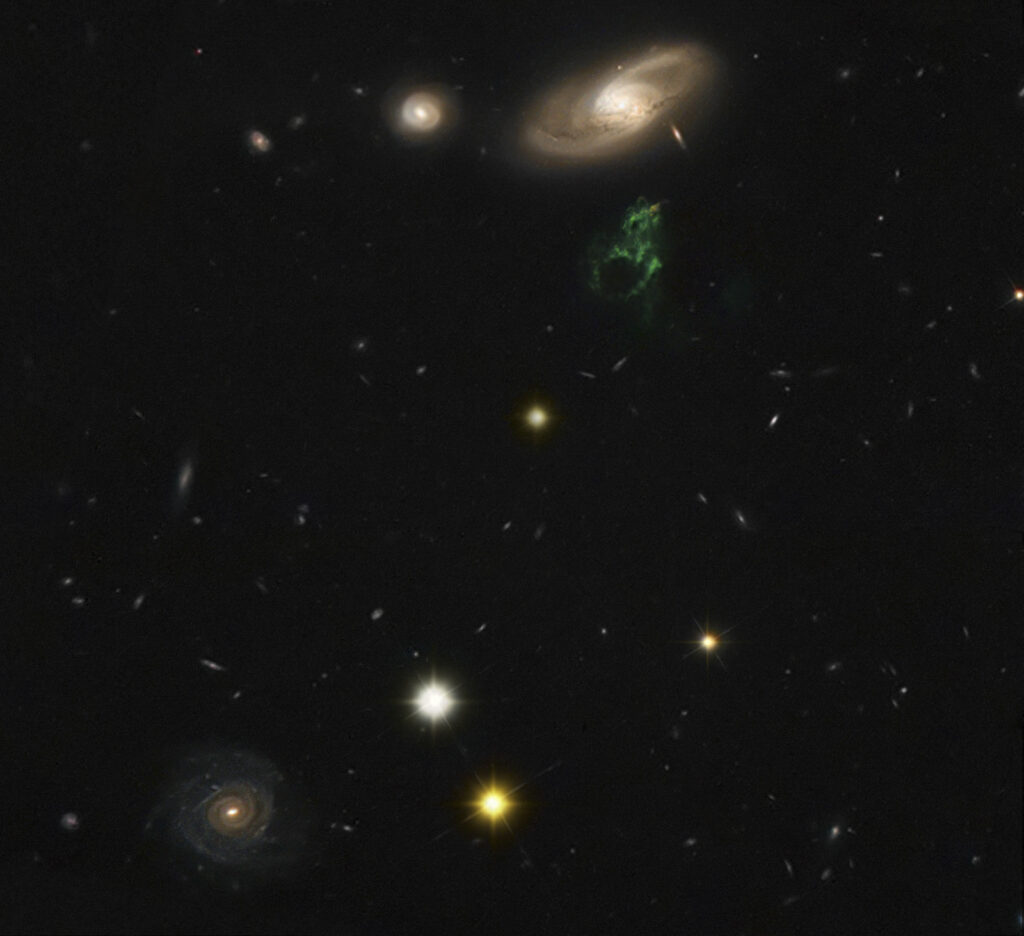 Last night we had a great lecture from Hanny Van Arkel at the Vereniging Christiaan Huygens in Papendrecht. She discovered a new kind of astronomical object in 2007 using the Galaxy Zoo. The class of objects is now called officially ´Hanny´s voorwerp (HsV)´ which is a great achievement I think.

One hypothesis suggests that HsV consists of remnants of a small galaxy showing the impact of radiation from a bright quasar event that occurred in the center of IC 2497 about 100,000 years before how it is observed today. The quasar event is thought to have stimulated the bright emission that characterizes HsV. The quasar might have switched off in the last 200,000 years and is not visible in the available images.

One possible explanation for the missing light-source is that illumination from the assumed quasar was a transient phenomenon. In this case, its effects on HsV would be still visible because of the distance of several tens of thousands of light years between HsV and the quasar in the nearby galaxy: HsV would show a “light echo” or “ghost image” of events that are older than those currently seen in the galaxy.

I know Hanny for quite some time now and we discussed several times about imaging the Voorwerp sometime using my own telescope. Until now it hasn´t been done yet, but as I was working with some datasets lately I promised her to check to see if there were any images anywhere in other databases, because there are no really good images of the Voorwerp yet, except for one Hubble image.

I started looking in the datasets and found that the 3.6 m Canadian-French-Hawaiian Telescope (CFHT), which data archive is being run by the Canadian Astronomy Data Center (CADC), had a set of images of the Voorwerp at a reasonable scale.

I decided to integrate the Hubble imagery with this dataset to see if I could get a bit more widefield view of the Voorwerp. The result is shown here, and I think it’s a bit of a premiere, because, as far as I have found, there is no more detailed image of the Voorwerp yet with this field of view.

This data was generated using the facilities of the Canadian Astronomy Data Centre operated by the National Research Council of Canada with the support of the Canadian Space Agency.