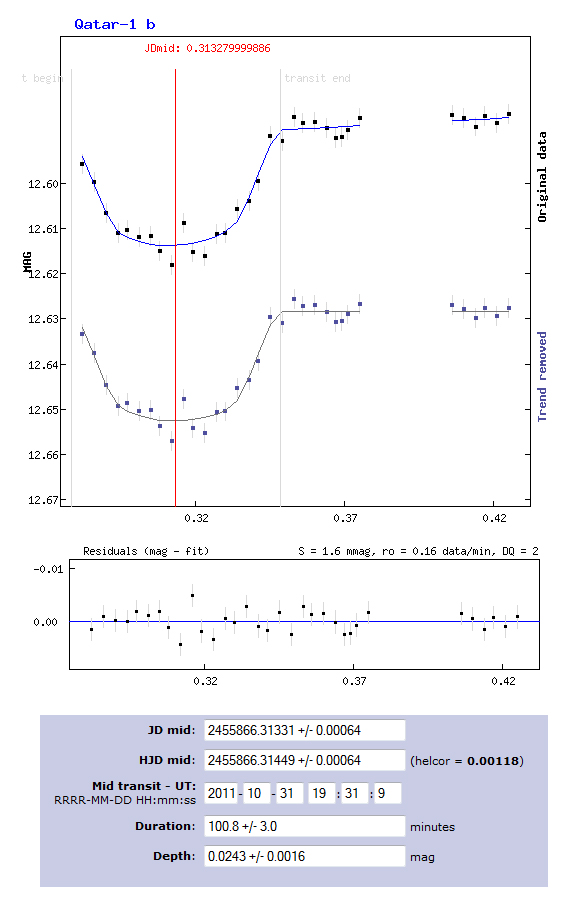 Qatar-1b is a gas-giant planet, 1.1 times more massive than Jupiter
and with a diameter 1.2 times that of Jupiter. It orbits an orange dwarf
star (named Qatar-1 in honour of the discovery, catalogue number
3UC311-087990) which is located 170 parsecs (550 light-years) from
Earth in the northern constellation of Draco. At this distance, the host
star appears about 200 times fainter than the faintest stars visible to
the unaided human eye on a clear moonless night.
The planet’s distance from its host star is just 0.023 times the Earth’s
distance from the Sun. It completes a full orbit every 34 hours.
Although the host star is smaller and about 800C cooler than the Sun,
the planet’s close proximity gives it a searing day-side temperature of
1100C.

This is my first exoplanet transit measurement using my home equipment. What a development has taken place from the first discovery of an exoplanet until this day where amateurs can see them with their own equipment!

To obtain the light curve images were made of 60s exposure time. These images were stacked per 5 and then photometry was performed. Of course darks, flats, darkflats and bias images were used!